Here are some case studies about the first 48 hours of a zombie outbreak:

Night of the Living Dead
Classic negative example. Not understanding the nature of the threat, they all hole up in the same farmhouse and practically end up killing each other before the zombies even get to them. Rookie mistake.

LESSON: Don’t fortify unless you possess the resources and resolve to withstand a zombie siege. 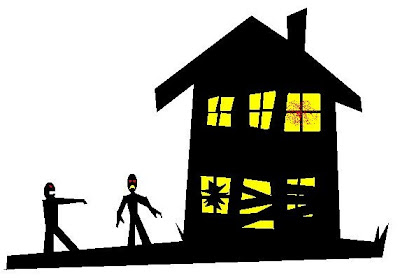 Dawn of the Dead (original and remake)
They try to fortify a mall, which is one of the least defensible places on the planet. Death wish. Malls are designed to let in as many people as possible, stupid!

LESSON: People in glass houses will be eaten first.

Day of the Dead
Civvie Scientists shack up with military wackoes who take over and cast out anyone who opposes their rule.

LESSON: Guys with guns are useful when zombies attack, but represent a whole other threat in their absence.

Return of the Living Dead
Hoping to be rescued, they call for help and the military nukes the town. Points for understanding the scope of the problem, but getting out of town would have been better.

LESSON: Do not trust authority. At best they will defend the greater good and at worst they’ll want to kill all witnesses.

Resident Evil
Realizing that they’ve released the zombie plague into their lab, they seal the building off and try to kill everyone in it.

LESSON: Corporate interests will take priority over rescue operations, but that doesn’t matter because containment is always impossible.

Rec (and Quarantine)
A camera isn’t kryptonite to something that wants to eat you. In Rec (and its American counterpart Quarantine) the film crew shows up for something else and ends up being the first responders to an outbreak of demon rabies.

This happens in Diary of the Dead too (which is just Romero’s pass at the POV filmmaking style): The first to die is a news cameraman.

This is the containment rule as it pertains to authority again. The government will either want to harness the virus to weaponize it or they’ll want to eradicate it for the public good. In either case they just kill everyone.

LESSON: Curiosity kills. The best defense is to not be there when the outbreak happens.

House of the Dead
24 hour party people get into a gun shipment and go John Woo on the lumbering dead, but eventually they get surrounded and have to hole up in a mausoleum.

LESSON: All video game movies suck. There will never be an exception to this rule. Also, all Uwe Boll movies suck. Unless they have Dolph Lundgren in them. He makes everything awesome.