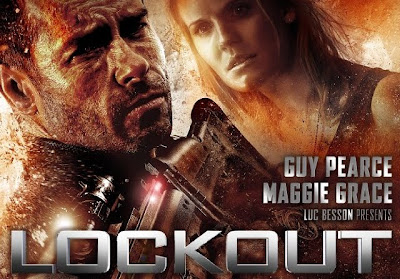 This movie is everything I thought it would be: A big dumb irreverent love letter to the 80's style of incomprehensible action and embarrassingly bad one-liners.

In other words: Everything I hoped it would be.

Even the trailer looked more like a parody than an actual movie, and the movie lives up to that great brazen no-holds-barred style of action movies that's been lost in a genre trying too hard to prove its directors are smarter than we think they are. This movie has no twists, no layered story within a story and it's not an FX-laden allegory for some deeper literary concept that never really plays out. It's exactly what it looks like: Guy Pierce is a wrongly accused secret agent sent to a maximum security space prison to save the President's daughter from an army of rioting maniacs. It's Die Hard meets Demolition Man meets Escape from New York meets Fortress, the least ironic idea for a big dumb action movie ever. I loved it.

So why am I annoyed? I couldn't get anyone to go see this movie with me when it came out, even though I knew it would be awesome. My friends wanted to see the Hunger Games instead, so we ended up seeing nothing.

That's the problem. Now that filmmakers have finally stopped trying too hard, the audience is overthinking everything. Movies don't have to reinvent the wheel, especially when the wheel was already awesome in the first place.