Movie From the Vault - The Dead Pit 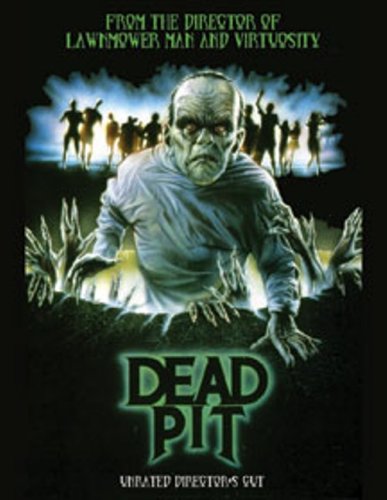 Brett Leonard is most memorable for "The Lawnmower Man", which was considered groundbreaking for its stylish use of CG FX, but later turned out disappointments like "Virtuosity" and "Hideaway" and is now more often seen making B movie crap like "Man-Thing" and "Highlander: The Source". But before all that he got his start with a little gem called "The Dead Pit".
I remember seeing the box for this in the video store because the cover was presented in relief and with the hit of a button the  eyes of the zombie would blink. I'd actually like to get hold of one of those if I can find one.
So anyway, in the movie an evil doctor is doing Satanic experiments on his patients for no reason and to no apparent benefit until he's finally killed and trapped (not sure why that's necessary after he's dead) in the dead pit beneath the hospital where he conducts his experiments. Enter: Jane Doe, a semi-psychic amnesiac who's institutionalized with the dangerously demented because she can't remember who she is. After an earthquake that may or may not have been caused by a psychic sissy fit, suddenly the doorway to the dead pit is re-opened and all the dead people magically come back as zombies.
This movie has all the fun 80's conventions, including Jane Doe's predilection for running around in her panties and occasionally getting her T-shirt hosed off. Lots of fun payoff and silliness for admirers of this era's alternative cinema. CG may have been Leonard's claim to fame later on, but it may also be what held him back. This was a really fun guts and gore flick, and I don't think he's made anything quite like it since.
Posted by Tv Ate My Dinner at 9:27 PM