In the Ray Nelson story Eight O’Clock in the Morning (which was the basis for John Carpenter’s They Live), George Nada is suddenly awakened by a hypnotist to see the world as it really is. This is, oddly enough, also the plot of Mike Judge’s Office Space, but I’m not sure that was an intentional parallel.

Listen Now!
Posted by Tv Ate My Dinner at 8:22 AM No comments:

We're covering it all in this one. Plus the boys discuss the Nightmare on Elm Street remake with our good friend Mudoogul Mudslinger, the horror of 2 girls 1 cup, and the impending doom of the swine flu!

Posted by Tv Ate My Dinner at 8:18 AM No comments:

You cannot deny the undeniable coolness of Episode Z!

Sean and Brooks take time from sharing their views on movies and television to prepare you, the listener, for mankind's inevitable fall to the growing zombie menace. This is one episode you can't afford to miss!

Listen Now!
Posted by Tv Ate My Dinner at 6:44 PM No comments: 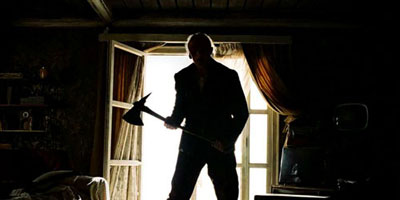 Brooks & Sean talk about important life lessons you can learn from watching horror movies. There are also a few lessons horror filmmakers can learn about their craft and the expectations of their audience.

Posted by Tv Ate My Dinner at 6:36 PM No comments:


I had a dream the other night that was sort of like Nightbreed. I went to this place where I went a lot to get away (which looked a lot like my house, except it was in ruins), and there were all these weird supernatural characters there. One was a dragon breather. He wore a motley coat like a jester and he was drinking a concoction so strong that it burned like gasoline. I know this because he would cry out "DRAGON BREATH!" then spit out of plume of it and light it up. Or maybe it just came out burning. I never saw him light it. I knew him, so he didn't scare me, but he was so drunk that he was really belligerent. This is not good with superpowered supernaturals. When they get out of hand people tend to die. He doused me with the brew (from the bottle, so it was not ignited) and I was sure that he was about to light me up for no other reason than he was too drunk to think of something better to do.

At that point another of my interesting Night Town acquaintances interceded. I don't remember his name either, but I call him the Multiple. He was dressed like a musketeer or a French gallant. At that point I guess I was pretty pissed because I ended up picking a fight with him too. I had only intended fisticuffs, but before I knew it he tossed me a foil and had one in his hand as well. At this point the dragon breather was also given a sword (not entirely fair but more sporting than being burned alive, I guess).

Just to make the situation more difficult, the Multiple gets his name from the fact that when he starts moving he starts being two guys. I don't know if he moves so fast he seems like two people or he really becomes two people, but it doesn't much matter. It was like fencing three guys at the same time, except when the multiples merged and they became a single man with a rapier in each hand.

Posted by Tv Ate My Dinner at 6:15 PM No comments: