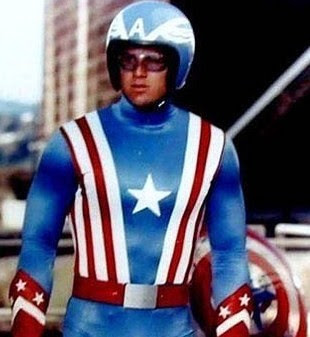 Posted by Tv Ate My Dinner at 1:37 PM No comments:

Truth, Justice, and all that other stuff

Scary Gary brought this article to my attention about Superman renouncing US citizenship. Symbolic gestures go with the territory for a guy who wears a cape and tights, but the "Superman" persona can't actually hold legal citizenship as it is not his legal name. The point they're trying to make is that Superman wants the values and ideals he stands for to be applicable to everyone everywhere. Therefore he must divorce himself from the conception that he is an instrument of the American government.

This is interesting. The idea is that Superman wants to stand for everyone, not just America. But "the American Way" used to be about standing for everyone, so who split from whom? It's a clever idea because it makes the suggestion that maybe America stopped being about the American Way.


It's not anathema to the superhero genre to address political issues. As a stylized art form they are actually in a better position to mirror the world we live in than other media. It's also good for superheroes and their scribes to ground themselves from time to time and analyse their world and through it ours.


Green Lantern and Green Arrow did this back in the 70's and it helped make comics better...

This could also be a good move for Superman when you consider future dystopia stories like "The Dark Knight Returns" that envisioned Superman as the red right hand of a corrupt American government. With this move he's making a statement that the principles he stands for are timeless and not subject to the changing of regimes. In that respect he's actually preserving the American Way, at least the one we all used to be so proud of.
Posted by Tv Ate My Dinner at 8:38 AM No comments:

Movie In the Vault: Turkish Batwoman

While perusing the web world for superheroine posters, I accidentally came across this print (sorry if it's too revealing, but it only has its full impact as shown): What's more fascinating about this purely prurient Turkish Batwoman movie is how difficult it is to find. I've browsed a bit for clips but apparently even die hard bootleggers have come back from Turkey empty-handed. I'm sure nothing lives up to this poster, but the mystique is only strengthened in the absence of a viewable copy. And this is coming from a guy who foolishly assumed that the Turkish Star Wars was the apex of what they had to offer in the way of bootleg B movies. I'm still on the lookout for this gem but it looks like I might not have any luck with this one.
Posted by Tv Ate My Dinner at 9:53 PM No comments:

If you're a fan of old school horror you should go see this movie. I was very reluctant when I discovered it was PG-13, but the TVAMD Twitter followers convinced me to give it a chance.

I won't give it away, but the story is strong and the characters aren't stupid. It has difficulty sustaining but it starts off with a few legitimate scares and gets you invested. In places it's overly ambitious, but it's fun and visually rewarding.

It has all the feel of an older horror movie but has some fun payoff. Having the right people on screen really makes a difference too.

This movie has everything that Paranormal Activity 2 tried to do, but when you don't care about the people it turns out you don't care what happens to their kids. That's something this movie got right where that one failed.

Posted by Tv Ate My Dinner at 4:20 PM No comments:

I don't care what anybody says, "Weekend At Bernie's" is still one of the funniest movies ever.  And it's all because of this guy...

Terry Kiser
Besides being the life of the party even though he was dead throughout "Weekend At Bernie's" and its dubious sequel, Kiser was also a staple of 80's movies and TV. He did guest spots on "The Fall Guy", "Magnum P.I." and "Knight Rider". He later played H.G. Wells in more than one episode of "Lois & Clark: The New Adventures of Superman".
He's one of those faces you know even if you don't know why, even though he's still most recognizable for his role as a corpse.
Here's the trailer for "Forest Warrior", a Chuck Norris eco-flick about evil loggers. So I guess Chuck's house is made of soy. I'm not sure, but watch close, because I'm pretty sure at 1:09 Chuck punches a chipmunk.
Posted by Tv Ate My Dinner at 8:33 AM No comments:

Cool Clips - Hobo with a Gun

This might also be the coolest movie ever made...

Posted by Tv Ate My Dinner at 5:32 PM No comments: Ryan Reynolds does a great job in this movie considering he has very little to work with. And I'm not referring to the "claustrophobic" surroundings that are meant to create the film's tension. I'm talking about the lack of story. The concept of the movie is meant to carry it the whole way, so they don't bother to introduce any element for us to actually care about.

Reynolds wakes up to find himself locked in a coffin and spends the first 10 minutes of the movies grunting and screaming. He then proceeds to call a mindless parade of remarkably useless morons on the world's greatest cell phone (he's calling from a coffin in the ground, remember). Just when you're ready to give up he gets a call from a terrorist demanding a ransom. The story maintains this level of absurdity until the end, where it peaks.

I don't believe any of the characters. Everyone but Reynolds is unforgivably two dimensional, so you can't accept that a world even exists outside that box. The trouble is, if I don't believe the world outside the box then I can't invest anything in what's happening inside it.
I also think the cell phone generation is more enamored of toys than they should be. I understand that this was the device they needed to give him a link to the world, but the tension built around it felt more like the aggravation one feels when trying to connect with tech support than a real crisis situation.

The whole movie's designed to prey on the viewer's personal sensibilities and so we never really develop any empathy for the character. The suspense is contrived and predictable, and sometimes they just do something dumb to break their own boredom. At one point an asp gets into the coffin and Reynolds has to MacGyver it with the contents of his flask and his trusty Zippo (what is he drinking, pure kerosene?)

The tone is also wrong. They're more interested in modeling this movie after torture-victim tragedies like Saw than legitimate character suspense thrillers. They should have watched "Phone Booth" instead. That movie did the same concept, but it actually worked. Or "Closet Land", which was much truer than this idea and disturbingly effective. This movie just felt like overly ambitious filmmakers experimenting with an idea they didn't fully understand.
Posted by Tv Ate My Dinner at 7:38 AM No comments: