Weapons are helpful, but they may not come in as handy as just having tools. You can’t depend too heavily on technology. The phone lines will be down, the roads will be too damaged to sustain vehicular traffic, the power will go out as soon as the monster gets within two feet of the building and your flashlight batteries will die seconds before you do.

Guns jam, but a hammer will never fail you. Learn to recognize those items that give you the best possible chances of staying alive.
Useful items:

All of these items can be kept in your home or car (reference State Law regarding the legality of where guns can be kept), so they can be ready when the situation calls for them.

Knives are good for lots of things.
Carry a pocket knife and a hatchet. They’re both useful as weapons and as tools. In most situations a large knife or machete will do everything a hatchet can do or more, so these might make a better choice. They’re also lighter and easier to carry.

Flashlights are good for lots of things.
Keep a decent LED light on you; they’re bright and lightweight. Pocket pen lights are good. A heavy duty mag lite might be good if you’re carrying a bag.

Don’t waste time on batteries.
Focus on replacing any flashlight that isn’t working.  If batteries become available, replace any as needed, but don’t carry extra batteries. They’ll just weigh you down. Keep some rechargeables in case you find a power source, but otherwise make do with what you can find.

Chem lights might be useful for emergencies, but I wouldn’t pack more than one or two and I wouldn’t use them liberally. In movies they’re always throwing them down a hole to see how deep it is; I wouldn’t call that a very practical use.

Fire is a good element to have at your disposal.
In a lot of ways you’ll be better off reverting to caveman practices. Overcoming a dependence on technology (even mechanical devices like firearms) means mastering fire and how to harness it. Learn how to create fire (this is another situation where Boy Scout training comes in handy) and where that fails keep as many fire-making implements on hand as you can.

This is like the hammer rule in that there is elegance in simplicity. If you’ve got a flashlight that’s fine, but fire will also make light. And fire kills things! Maybe if you had a mag lite that could be a bludgeon, but you’re not going to kill a monster with a flashlight (unless it’s a gremlin or something).

Stock up on disposable lighters and matches instead. They’re easier to come by and easier to carry than batteries and flashlights.

You don’t want to have to rely on the night vision of your camcorder to make your way through the dark subway tunnels. I’d much rather have fire there.
Maintain communication.
Forget anything that requires a central node or a recharge station. Walkie-talkies work on common batteries (or rechargeables), they’re lightweight with a limited range and communicate peer to peer.

I know I just said to forget batteries, but if you have to have them for anything, this would be the best use for them. Use these sparingly to conserver power, but remember that batteries die eventually whether you use them or not.

CB’s and ham radios might also work, but be careful who’s listening. They have a longer range and might attract marauders or representatives of the New World Order. 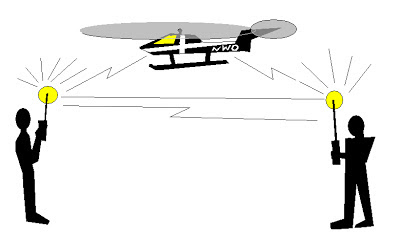 Rudimentary communication like visual signals and forward planning are more useful because they rely on the resourcefulness and organization of the individuals.

This is caveman thinking again: Learn to communicate and coordinate as a unit without depending on technology.
Posted by Tv Ate My Dinner at 5:21 PM