As far as seeking supplies, some might recommend looting a gun store. That’s a bad idea for obvious reasons. Personally, I would go to a place where there’s nobody with guns, even if I’m one of them. Food and water are the higher priority; you can go looking for weapons (if you don’t already have them) once you’re entrenched somewhere with a food supply.

In the Dawn of the Dead remake the guy who holes up in the gun store eventually gets it. He lasts a long time, but eventually he runs out of food. The guys in the mall hold out longer because they have access to food and water.

·        The primary should be a semi-automatic (8 shots or more) with  hammer action and laser sight.
·        Hammer action gives you the option to cock the gun for quicker firing in a pinch and laser sights help you line up head shots faster.
·        Keep a couple of extra magazines on your person and a couple more in your bag if you have one.
·        On laser sights, don’t count on 100% accuracy. Test it out and practice keeping a steady hand. Laser sights don’t guarantee a hit, they just make it easier to line up the shot.
·        I’d keep this strapped to your side like a six-gun. It won’t be in your way as much and it won’t hurt to show anyone you run into that you’re heeled.
·        Your backup should be a compact revolver, preferably a smaller .38 designed for concealability.
·        This is a good weapon for an ankle holster. It can also fit easily into a pocket.
·        Shake down any slide action weapon to work out the kinks; new guns should be fired a couple hundred times to break them in so they don’t jam. Keep it cleaned and oiled.

Keep your safety on.
Gun safety may seem like a frivolous concern, but consider how many casualties are sustained in war-time due to friendly fire. Keep one in the chamber with the safety on. I would also avoid “Safe Action” trigger safety pistols, because they require more pull-back when firing. You want safety until things get dusty, then you need a hair trigger.

Don’t be too stingy with your ammo.
You need to be proficient with every gun you own, and to stay in good form they have to be fired every now and then.

·        Ammo becomes less reliable over time, too, so there’s no use holding onto the same stock too long.
·        If you stumble upon a massive cache of ammo, resist the urge to overstock. I’d use that as an opportunity to get in some much needed target practice and hide the rest. You might be out that way again.
·        Keep your shells if you can. They might be reusable, but I suspect ammunition and empty shells will become a form of currency in the zombie war.
·        People with the means will re-load them and recycle them, so the empty shells will have value.

Don’t weigh yourself down with weapons or supplies.
Running away is still the best defense. You don’t want to get tangled up or trip over your gear when you’re getting mobbed by zombies.

Carry a rifle or a shotgun, but probably not both. It’s best to carry this with you, but when you need yours hands free you can keep it in your bag (if you have one) or get a shoulder-strap.

Bags and straps are tricky in terms of encumbrance. A strap can get caught on something and nearly get you killed (like in Indiana Jones and the Lost Crusade) or it can conveniently catch on something and save your life (like in 3). I’ve been in situations where a bag was an asset and others where it was a liability. Try it out and get to know what you’re comfortable with. This is an ongoing issue to consider and what works for you now might not work for you later on.

A weapon is also a tool.
And vice versa. The most useful items are those that have a practical purpose both on the battlefield and off it, like a shovel or an aluminum bat.

Most of the greatest weapons you already have in your house. Just grab a hammer! You could ruin someone’s whole world with a hammer. And in some scenarios the human beings who created the monsters might still be around, trying to eliminate the witnesses. A hammer would do a lot of damage to those guys.

Knocking down doors might be just as important as knocking in heads, so anything with a little heft is good to have around. But don’t knock down a door if you’re looking to hole up. Any door you can knock down shouldn’t pose much of a challenge to a zombie horde. But at least with a bat you can clock them in the face as they get through. 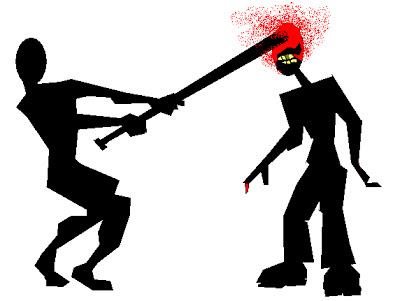 ON AUTOMATICS VS. REVOLVERS:

While semi-automatics fire more shots, they’re also more likely to jam and can take longer to reload. If this is your weapon of choice, make sure you have as many spare magazines as possible. It’s much quicker to change the clip of a semi-automatic than it is to reload a revolver, but loading the clip itself is a tedious process.

Revolvers are more reliable and load faster, especially if you have a speedloader. One disadvantage with the revolver is that they can’t hold as many shots and they don’t automatically eject spent cartridges. Clearing the cylinder is an added step that costs you precious time when reloading.

The mechanics of the revolver are simpler and they’re more reliable. They’re also quicker to fire: Just pull back the hammer and you’re a hair-trigger away from splatsville.

I prefer the auto because you can keep a couple of extra magazines at the ready, which gives you more rounds to work with in a pinch.

The most important thing is to have something that works right and shoots straight, because like my dad says: “If you’re fighting something that takes more than 6 bullets to kill, you’re dead anyway.”