While it was certainly the first Expanded Universe work to be produced, Splinter of the Mind’s Eye just barely missed out on the distinction of being the first original EU story ever to see print. It actually wasn’t even the second. The Marvel comic beat it out by about a month with the January 1978 printing of Star Wars #7: New Planets, New Perils!
But both of those stories were preceded by a serial that ran in Marvel’s pop culture magazine, Pizzazz. Pizzazz was Marvel’s short-lived effort to broker their Star Wars tie-in into an effort to corner the youth magazine market. That market was dominated at the time by similar periodicals like Dynamite magazine. Pizzazz lasted only 16 issues and then disappeared. The Star Wars stories published in the magazine have only been sparingly reprinted and mostly went unnoticed by everyone but super-fans and guys doing research to write a book about the Star Wars Expanded Universe. 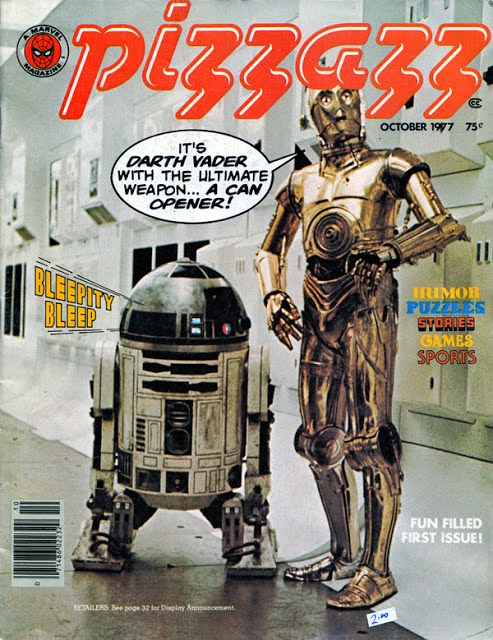 The Keeper’s World serial was the first of these stories. It follows a similar storyline as Splinter of the Mind’s Eye (although I think the similarity is coincidental): Luke and Leia take the droids on an important mission, get jumped by Imperials, then are forced to land on a mysterious planet where they have mystical hijinks in an ancient ruin.
The imagery of the Massassi ruins on Yavin 4 was a big influence on the early EU. Not only did the rebels spend a lot of time there in the comic and comic strip, but in stories like Keeper’s World and Splinter of the Mind’s Eye they ended up exploring similar ruins on other planets. Even Lando Calrissian will end up exploring an ancient pyramid as he searches for the Mindharp of Sharu, but I’m getting ahead of myself here.
Despite those plot similarities, the story of Keeper’s World plays out more like a Jack Kirby comic than Foster’s novel. A living super computer builds a bunch of android children with elemental superpowers and they all end up helping Luke and Leia escape the Imperials.
The important thing to remember about Keeper’s World is that it’s the first original Star Wars story to appear outside the movie. The monthly comic was in publication first, but its first six issues were spent adapting the film. By the time Star Wars #7 was published, the Pizzazz serial had already begun. 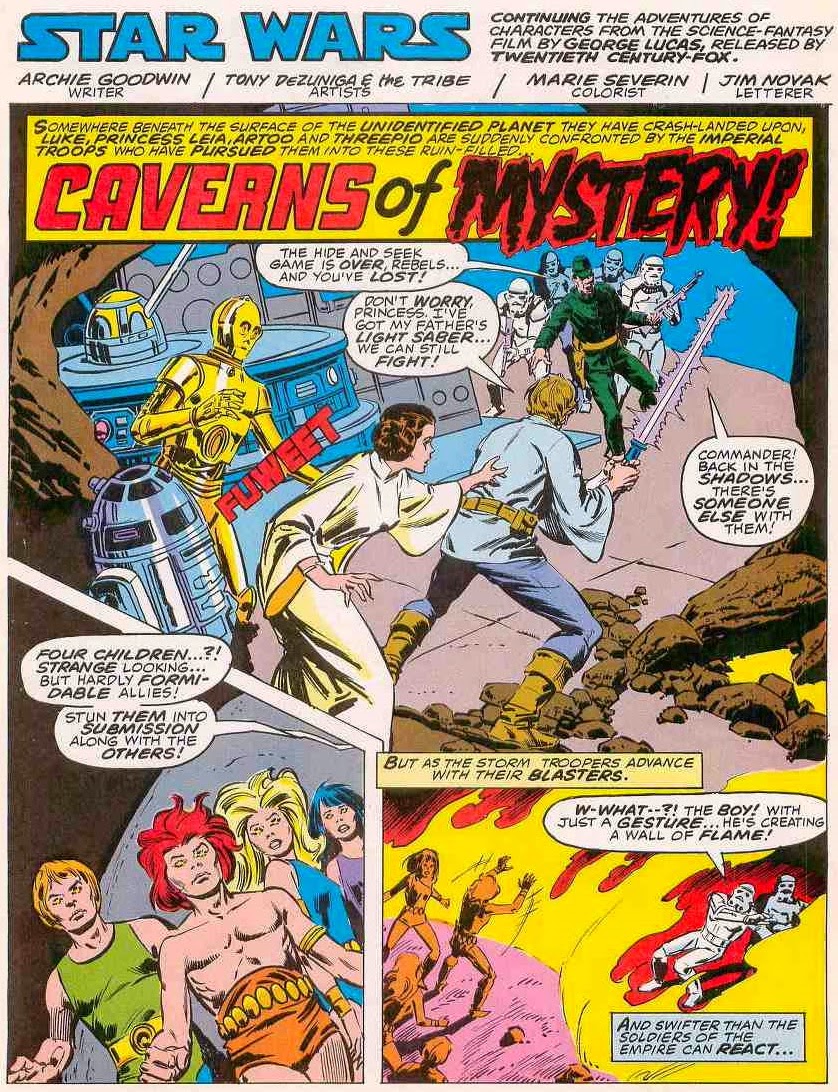 Technically all of these stories ran concurrently. The Keeper’s World serial started first, but didn’t complete its run until the Summer of 1978. New Planets, New Perils! was published in January 1978, but it was the start of a storyline in the Marvel Star Wars comic that didn’t conclude until April of that year with the publication of Star Wars #10: The Behemoth from the World Below! While Splinter of the Mind’s Eye was published in February 1978, after both of those stories began their run, it was the first original Star Wars story to appear in its entirety. So the first writers to create Star Wars EU were Alan Dean Foster, Roy Thomas, Howard Chaykin, Donald F. Glut and Archie Goodwin. Foster has the singular credit of writing Splinter of the Mind’s Eye while Roy Thomas wrote most of the Keeper’s World serial and most of the story arc that ran from Star Wars #7 – 10. Howard Chaykin co-wrote many of the issues in that story arc and Donald F. Glut co-wrote the final issue of the story. Archie Goodwin gets a nod for writing the final chapter of the Keeper’s World serial. It should also be mentioned that Chaykin did most of the artwork for both the Marvel comic story and the Pizazz serial.
Keeper’s World also ran as a serial in the UK Star Wars Weekly magazine. Dark Horse reprinted the story as a Star Wars # 0 one-shot and then later in the Wild Space Omnibus. But beyond that it remains a fun footnote in the history of the Star Wars Expanded Universe.
Posted by Tv Ate My Dinner at 8:03 PM