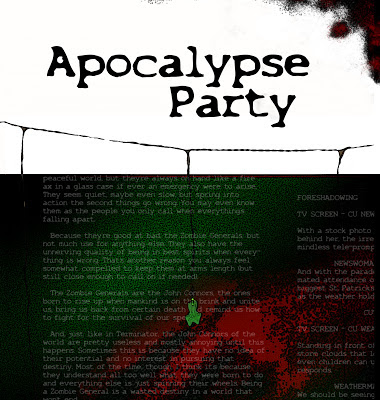 Apocalypse Party by Sean Gilbert is the basically mostly kind of true story about how Sean and his intrepid friends were forced to save the world one year when the St. Patrick's Day festival in Savannah almost turned into a zombie alien apocalypse. Here's the dust jacket synopsis:

THE FOLLOWING IS BASED ON A TRUE STORY...

Did I ever tell you about the time I died?
Yeah, probably not. That's a good setup for a story though, right?

I have told this story before. For the sake of those involved I omitted some of the more bizarre elements, but as the years have gone by I have come to realize that the full details must be made known. What if the unexplained incident that occurred that St. Patrick's Day in downtown Savannah were to be repeated elsewhere? It's irresponsible to withhold what little I know of it, especially in light of the fact that no one else seems to remember.

This is the story of how all Hell broke loose one night in Savannah, how the end of the world was very nearly the result of it, and how I was put in a position to stop it just by deciding to stay home.

Read it. You might like it. It's mostly weird and kind of stupid and at least a little bit true.

And the profits go to a good cause. Almost all the proceeds go right to Sean, who on occasion uses his resources to save the world.