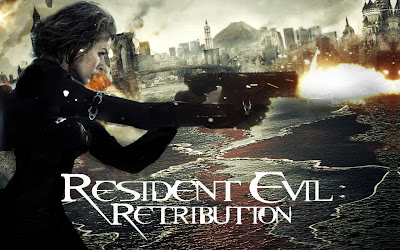 The Resident Evil series has been both awkward and at times baffling, first in its inexplicable longevity and second in the random turns the story takes. The fourth installment had a hard time deciding what it was about and ultimately settled on being a mindless stunt show shot on a 3-D camera.

But the latest in the series seems to have found its footing and helped to prove that every odd-numbered installment is worthwhile. The first one was a fun zombie action flick while the second was dumb and uninspired. The third had a cool Mad Max post-apocalypse vibe while the fourth was a clunky annoying disaster. Now the fifth has managed to redeem its predecessor by putting the 3-D to use without offering it as a substitute for story.

Not that the story is a mind-blower. It's a fun action romp through various set pieces where the characters only stop shooting machine guns at each other long enough to karate fight zombies and CG monsters. But that's what it set out to be. It delivers the action it promises throughout.

This one also has a fun way of bringing back a lot of familiar faces from the earlier movies, so for those of us who have made it through the entire series it's got a cool sense of nostalgia. In a time where there are no horror franchises to speak of (outside of Saw and Paranormal Activity), at least Resident Evil is offering up the goods without irony or apology.